Start a Wiki
Flynt is a team captain of Team Slipspace.

After Flynt gathers the team to watch the Commissioner's press conference, Flynt and the rest of Slipspace learn that a new expansion team, called "Team Heretic", will be added to the Intergalactic Grifball League of Earth. When it is revealed that Team Heretic is made entirely of Elites, Flynt becomes stunned into silence.

Before the match against Team Heretic, Flynt convinces Coach to not give a speech to the disheartened players of Slipspace. He also comes up with the game plan of staying out of the aliens way, so they don't all die. This plan later proves to be unnecessary, because the Elites end up being terriable at the game due to a lack of understanding of Grifball's rules. During half time, Flynt negotiates with the Commissioner for perks if the team agree to let the aliens win.

Flynt seems to be the only intelligent member of Slipspace. Much of the series involves Flynt dealing with the stupidity of Coach, Rookie, and Tank. 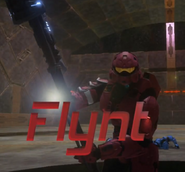 Flynt being the runner
Add a photo to this gallery
Retrieved from "https://grifball.fandom.com/wiki/Flynt?oldid=5375"
Community content is available under CC-BY-SA unless otherwise noted.