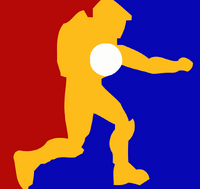 An Airballer or Floater is when a ball runner who has honed their Wave Rider skills sails gracefully over the heads of the opposition landing straight on the opposing goal, riding the shock waves of either team.

The act of the ball carrier jumping into the air and passing the ball down to a teammate on the goal, bypassing the defense and scoring.

A move in Halo: Reach's Grifball Dash where a player could evade while picking up the ball, for an extra-fast, extra long evade.

By using their own hammer to propel themselves into the air, a player can simultaneously pick up the ball to jump extra high over the opposing team's defenders, usually for a score.

Using the hammer in Halo 4 to purposefully (or accidentally) launch the ball across the court. Named after 343 Industries' Kevin Franklin, who created Grifball in Halo 4.

A player who accidentally releases the ball into the hands of the opposing team, often due to stupidity.

When a runner dies right next to the goal, a Janitor can "clean up" by quickly picking up the ball and carrying it the rest of the way.

The premise behind a launch is simple; you just hammer your ball runner as he jumps, and the gravity effect of the hammer sends him flying. A perfect launch can send the runner farther and higher than a flower would. It’s also quicker to have your teammate launch you than it is to drop the ball on the ground and flower. The only issue with a launch is that the runner usually ends up with low or no shields from his teammate’s hammer. In that regard flowering can be better.

When a player picks up the ball off the tip-off and runs directly to the other's team bomb plant for a score within the first 10 seconds of a round.

Camping in the enemy's end of the court, killing the other team as they spawn to create a path for the runner to score. The legitimacy of this strategy is up to debate.

Racking up kills and medals while the runner makes no effort to score. Also known as "griefing". Frowned upon in the Grifball community.

Using the small ledges on the ends of the court, a player can "double jump" to get extra height and evade enemy tanks.

If the ball-carrier has full overshields, he can wave ride by jumping over a player, on the other team's or his, and at the cost of his shield he can be flung across the map. Sometimes the ball-carrier will just be propelled upwards but, using this tactic he can go from your side of the field to the goal. It is possible to wave ride multiple times if one is in the air long enough to let the shields recharge. Using the Energy Sword against the ball-carrier can be more useful than the Hammer because of having no possible way of wave riding.

Retrieved from "https://grifball.fandom.com/wiki/Glossary?oldid=5470"
Community content is available under CC-BY-SA unless otherwise noted.