""This is the best game since itself!""
—Grifball Slogan
"In 2554, the Red Army introduced Grifball to the world. By 2557, all other sports had been abandoned."
—Other slogan

Grifball is a community created gametype made by Burnie Burns of Rooster Teeth. 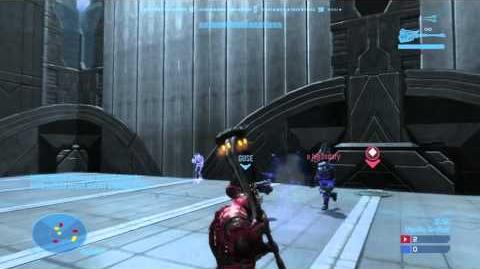 The game was originally played as an Assault variant, on a customized version of the Foundry map using Forge in Halo 3, and in a variety of map variants of Forge World in Halo: Reach and Halo 4. Players are given infinite usage of the Energy Sword and Gravity Hammer as a means to attack and defend the other players in the game as they help their ball carrier plant the bomb in the opposing team's goal. While the arena usually lacks any obstacles, the game becomes extremely intense and strategic as the game relies heavily on teamwork and a bit of luck. The game often results in players getting several multi-kills up to Killionaires and occasionally an bomb kill (usually due to exploding Bombs).

Grifball was originally nothing more than a gag from Season 4 of Red vs. Blue made by Sarge at Grif’s expense:

"In Red vs. Blue of Rooster Teeth, Sarge is taking pop-shots with a sniper rifle at Grif (his orange soldier), whom he hates. He’s having a great time and blurts out 'This is the best game since Grifball!' That was written about three years ago and we always wondered what kind of game Grifball would have been. That’s why the ball carrier turns orange – everyone in the game is constantly trying to hammer-smash Grif and even if he scores, he explodes. Either way, Sarge wins." - Burnie Burns[1]

"It came about when we were making the Red vs Blue D.I.Y. video for the map pack release. There was an extended version of the script that had Donut and Grif making Forge creations on Foundry to go along with Simmons’ rail gun invention. Grif’s invention was going to be the laziest game type possible, where you basically walk into the middle of the room, pick up a flag and plant it two feet away. That scene really wasn’t that funny after the flying dumpster gag, so it was cut – but I had already made the game type. I started messing around with it while we were uploading the video." - Burnie Burns[2]

During Week 2 Highlights of GBWL08, the ball-carrier (A.K.A. Grif) did NOT die after scoring. The Grif dropped the Bomb and rode the Hammer shock wave away from the explosion to safety. When the video ends, Sarge is heard crying in the background, "I'm so sad, I don't think I can go on. End it now, end it now." 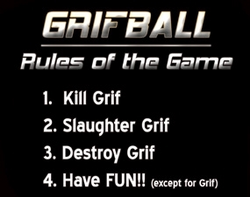 Grifball is a simple game, akin to modern-day rugby. Two teams of 3-4 players square off in a simple arena in which each team has a goal. The object is to take the ball in the middle of the court and put it in the other team’s goal.

Changes between Each Halo

You can play a version of Grifball on Halo 2 by creating a game variant. You create one under Assault, but unfortunately the ball carrier doesn't turn into Grif and there is a minimum 5-second arming time.

Grifball was orginally made for Halo 3.

Retrieved from "https://grifball.fandom.com/wiki/Grifball?oldid=5645"
Community content is available under CC-BY-SA unless otherwise noted.