Stu Stuman of UNSN sports introduces the match between Slipspace and BosaNova Bosses as an unfair matchup because Slipspace has one player injured and another player on strike. Stuman also points out there has be issues with Slipspace's lead blocker, Tank.

Coach is trying to help Tank with his concerns about seeing double. Tank explains that he only some things as double such as gloves, shoes, and dice. Coach then advises Tank to hit right in the middle if he sees two of something.

Meanwhile, Flynt tries to convince Rookie to play. Brash says that Rookie will no longer speak to Flynt in order to protect the unfair treatment of the League. Flynt points asks why Rookie is protesting now, since the league has always treated them unfair. Brash says it is because advantageous to Rookie and Brash, despite being crappy timing for Slipspace. Flynt then asks the Commissioner to force Rookie to play, but the Commissioner is too busy making preparations for tomorrow's negotiation.

The side screens of the UNSN newsroom shows clips from Rules of the Game and Red vs. Blue: Revelation Chapter 10 and Chapter 19. 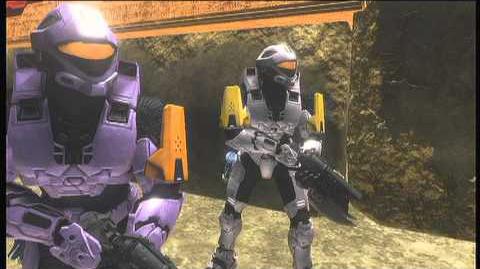 Retrieved from "https://grifball.fandom.com/wiki/Grifball:_Double_Agent_2?oldid=5480"
Community content is available under CC-BY-SA unless otherwise noted.