Expansion 1 is the first part of Grifball: Expansion

The episode starts with sports talk radio talking about how Team Slipspace is the worst team in the Grifball League.

Flynt finds Tank staring at a wall and asks him where the rest of the team is, because Coach said that the team needs have a meeting about the League's upcoming announcement. After dealing with Tank's stupidity, Flynt learns that Jacques and Rookie are on the practice field.

The Rookie becomes confused by Jacques' sports advise when Flynt shows up to tell the players about the League's press conference.

Team Slipspace is now gather around a television to see Stu Stuman of UNSN Sports talk about the Grifball League's short notice announcement. The Commissioner then shows up to announce that deceased Team Cannonball will be replaced by Team Heretic--a team of Elites. The audience of the press conference react in terror to the announcement. 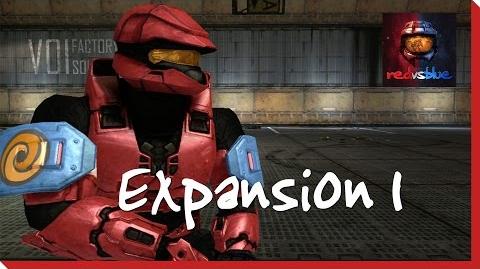 Retrieved from "https://grifball.fandom.com/wiki/Grifball:_Expansion_1?oldid=5386"
Community content is available under CC-BY-SA unless otherwise noted.