While XT is training with Rookie in the Practice Facility, Coach asks Flynt how the team is doing. Flynt says he is surprised to see Rookie and XT get along, because Flynt thought Rookie would be jealous of the new guy. Coach and Flynt then become surprised when they notice that Rookie and XT are dancing. The Commissioner then shows up because XT's contract requires the Commissioner to give compliments to XT every five minutes on game day.

Stu Stuman of UNSN Sports introduces the upcoming match between the Harvest Kings and Team Slipspace as the match that almost nobody is talking about. Stuman then says it will be interesting to "rookie 'Extermination' Murphy" play while still doing hard time. Because of XT's contract, Stuman is informed that he is getting fined for calling XT a "rookie".

The match starts with a conversation between the team captains. Pounder promised payback to Flynt for what the alien did to him during the interview he had last season. Flynt points out that the alien wasn't on Team Slipspace and that Slipspace did Pounder a favor by beating the aliens. Ignoring Flynt point, Pounder threaten to put XT in a box. Because XT is already in a box, Flynt calls Pounder a moron.

After scoring on Slipspace, Pounder rallied the Kings to take out XT. After the Kings gather together, they make an easy target for Tank to strike the entire team with one Gravity Hammer strike. Rookie then proceeds to push XT and his cage to pick up the bomb and then push then towards the goal. Rookie abandons XT next to the bomb. While XT is busy doing his victory dance, the bomb explodes and kills him. 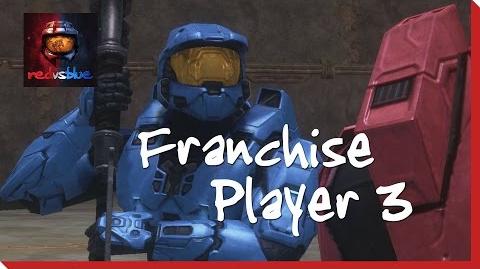 Retrieved from "https://grifball.fandom.com/wiki/Grifball:_Franchise_Player_3?oldid=5531"
Community content is available under CC-BY-SA unless otherwise noted.