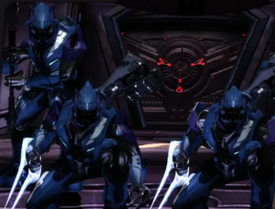 Team Heretic is an all-Elite Grifball team from the planet Sanghelios.

After the death of Team Cannonball during the last season, the Commissioner introduces Team Heretic as the Grifball League's new Expansion team. The Commissioner had furthermore, chosen to Coach Team Heretic himself, despite the massive conflict of interest that represented in order to ensure the new interest and endorsements the Elites brought in would continue.

Pounder McJones, the captain of the Harvest Kings, has an interview with Stu Stuman about the impact of having the Team Heretic introduces into the League. Sa'aangrh'ama'a'a, the captain of Team Heretic, enters the interview and learns that Pounder has been bad mouthing the Elites. Sa'aangrh'ama'a'a responds to the comments by brutally attacking Pounder with an Energy Sword. After this incident, multiple companies would in succession; sponsor Team Heretic and then drop them shortly after for "morality reasons".

As soon as the match between Team Heretic and Team Slipspace starts, Team Heretic starts to team kill one another. The one remaining Elite is then dispatched by Rookie who then runs the ball into the opposing team's goal. By halftime, Slipspace has a sizeable lead because of the Elites' lack of understanding of the game, which is likely tied to the Commissioner's admission to Team Slipspace that he neglected to have the rules translated into their language. The Commissioner then has to ask Slipspace to tank the game, because he bet the League's teams and assets against the advertisers that Slipspace would lose. Before agreeing to throw the game, the members of Slipspace demands a bunch of benefits from the Commissioner. What follows is a long, ridiculous game that results in Heretics' win due to Slipspace herding the aliens to the correct goal.

What became of Team Heretic after this first match is unknown; Pounder McJones would seek proxy revenge for his mutilation against Team Slipspace (evidently feeling that Slipspace having played them was close enough) and the all Elite team would be referred to as a 'debacle'.

The Commissioner introduces the Expansion team

Heretic faces off against Slipspace

Sa'aangrh'ama'a'a, Heretic's team captain
Add a photo to this gallery
Retrieved from "https://grifball.fandom.com/wiki/Team_Heretic?oldid=5631"
Community content is available under CC-BY-SA unless otherwise noted.