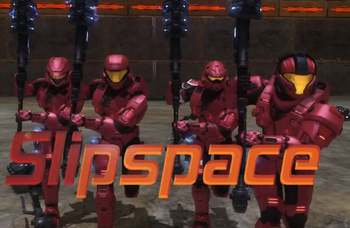 Team Slipspace are the feature characters in the Grifball mini-series.  Up until Game Changer, Team Slipspace is the worst team in the Intergalactic Grifball League of Earth.

Team Slipspace learns from the Commissioner that they are going to be first team to play Team Heretic--a team of all Elites.

The Commissioner forces Slipspace to take XT, a expensive new rookie and a convict. They later learn that XT is confined to a small cage due to a court order and that he is required by the contract that his has to be the team's runner. Rookie becomes jealous of XT for replacing him as the team's runner, so he plots to have him killed. During their match against the Harvest Kings, Rookie pushes XT with the bomb into the goal and then leaves him next to the exploding bomb.

With XT being killed by an exploding bomb, Slipspace is short one player. Things get worst for Slipspace when Rookie's new agent convinces Rookie to go on strike.

After Slipspace acquires Macdougal, the Commissioner informs the team that they are disqualified due to Macdougal using an illegal substance--even though he played on another team at the time.

Four years later, Team Slipspace has won two championships and Rookie has become league MVP. The Commissioner then shows up to tell Rookie that the League is going to change, because things have gotten stale after Team Slipspace, the former worst team in the League, wins every match they play. The changes include new uniforms, new maps, and a new game called "Ricochet‎".

Slipspace talking to the Commissioner
Add a photo to this gallery
Retrieved from "https://grifball.fandom.com/wiki/Team_Slipspace?oldid=5423"
Community content is available under CC-BY-SA unless otherwise noted.